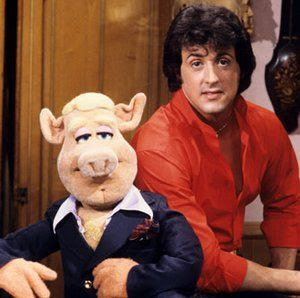 Career setbacks aren't keeping Stallone out of the ring
BYLINE: Chris Garcia, AMERICAN-STATESMAN FILM WRITER
DATE: July 25, 2003
PUBLICATION: Austin American-Statesman (TX)
SECTION: Movies
Stallone appears tan and fit on this day, his shirt sleeves stretched taut around softball-sized biceps. It's said Stallone stands between 5-feet-8 and 5-feet-10, which looks about right. While that's the average height of a grown man, it's apparently Lilliputian to spectators who want their screen heroes bigger than life.
Posted by Joe M. O'Connell at 12:19 PM